Conditional Injury is a wound based system to replace the hit points in GURPS. I don't necessarily prefer one or the other, but it's a fun alternative that gives a different flavor to dealing with wounds; some might argue it is more realistic than hit points, I dunno, haven't watched enough people die in real life to make an authoritative statement one way or another. Get the cheat sheet here, if you like it.
Posted by Pseudonym at 12:36 PM No comments:

Pseudobot - Math and Graphs; How Fair is the Random Stat Generator?

So, last week, and the week before I worked on a tool to randomly generate character attributes in a way that the results would all have the same point values. At first, the algorithm assumed a character would have no decreased attributes and secondary characteristics, which was not satisfying to me, so I adjusted it so that the character could have minimum values based on some numbers I extrapolated from various GURPS sources as the bare minimum ok amount for a character. I think this was a good improvement. However, after making a naive implementation of the algorithm that gave each attribute or secondary characteristic an equal chance of occurring, on a whim, I decided to generate several thousand characters to see what the expected outcomes would be like. The result was that certain things apparently had certain unfair advantages in selecting them that made it so that certain attributes had noticeably lower or higher averages, thus began a complicated process of trying to make the algorithm as balanced as possible. 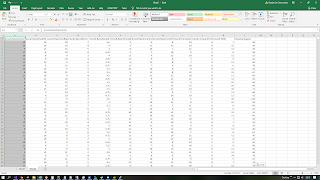 This took a really long time to get right, but I have arrived. This is the stats of 20,000 randomly generated characters with 0 points.


The goal was to make it hit close to what a 0 point character would be. The tricky part is that there is bounding logic which means that the difference between HP and ST isn't allowed to get too far off track, so, for example, if HP is currently at the minimum relative threshold to ST, more ST can't be added until more HP is added. This causes a complicated chain reaction where slightly nudging the balance one way or the other suddenly makes a different result much more likely. I had some weird problems with average IQ suddenly jumping 1 or 2 whole points - not 10.2, 12 - trying to balance the probability of FP versus HT, HP versus ST, Perception and Will versus IQ, but after holding it up to a very shoddy standard of scrutiny, it looks "good enough for me." I might analyze the math and source code in an upcoming post, maybe someone can point out an obvious flaw.

Posted by Pseudonym at 10:31 PM No comments:

I added this to pseudobot; I think it's pretty simple, but ah well. It calculates jump height and distance and optionally includes enhanced move and super jump. Wow. 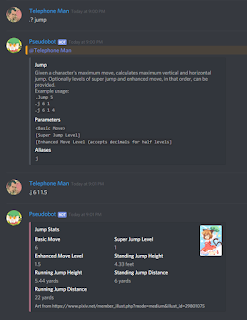 Posted by Pseudonym at 9:06 PM No comments:

Similar to my pointless slaying and looting random character generator, but this one just randomly spends a given amount of points on attributes and secondary characteristics. Now you can have "balanced" random stats if that is your thing. I dunno why I made this, but I did. 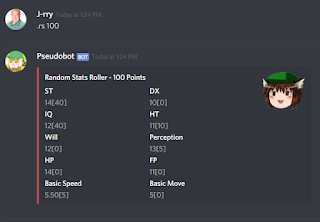 Posted by Pseudonym at 1:26 PM No comments:

It does what I say it does. It rolls random tables and comes up with a lot of stuff for a parallel world. Use it if you like, don't if you don't. 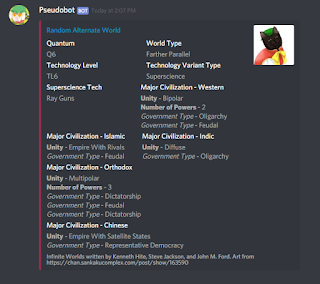 Posted by Pseudonym at 2:13 PM No comments:

This is a short post, because I need to post something, but today is busy. Basically, extrapolating from the Fast-Draw skill and the Quick Reload perk, perhaps anything that is only almost too long for combat that is represented as a series of ready maneuvers can be reduced in time.


I think this is a pretty simple cinematic stop gap for a weird question I've seen come up a lot, "how can my character do this annoyingly slow thing that is performed as a series of ready maneuvers without a controlling skill in a fast way?" It might be a little powerful if unchecked, but there are rules for controlling how many perks a character can have if that is a concern for a GM.