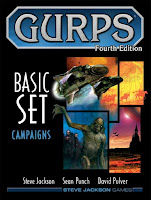 So, this is what happened in the wild world of GURPS. My take, after the break.

Look's like a design of a new setting, seems to be the zeitgeist in GURPS blogging recently. Working towards developing an Ultra-Tech future society, and currently focusing on the social aspects.

Fragments of the Last War

Another session summary blog. This one looks like an intensely combat focused campaign set in a fantasy setting. Tons of screenshots and photographs make it pleasurable just to scroll through. Thought I already saw this one?

The list of new blogs is getting shorter; probably just about done getting all the earlier established blogs. Tons of people are doing settings, but that is kinda hard for me to wrap my head around. I love GURPS content, I love spells, powers, advantages, builds, encounters, adventures, but for me, a setting is kind of a deeply personal thing. I don't know if I'd ever want to play someone else's setting, and I don't think anyone but my players would want to play my settings, but maybe there's more to it than that? Edit: I do like the approach Mailanka is taking with guiding readers through the process of setting up a setting though.
That was a whiny note to start with, let's see what else I can say on the positive side. I liked Overhead Attacks. Maybe I should look into writing some posts on customizing standard melee or unarmed attacks. Greatly enjoying Collaborative Gamer's on-going demo series. Thought it was interesting that this Further Up The Spire post had the same idea that I had for melee academy, but had completely different content. Dungeon Fantastic has a deceptively interesting series on doors as well, didn't even look at it at first because the concept seemed a bit dry, but clicking through a few, it looks like some interesting stuff hidden under the surface.

One of my sparsest weeks in recent history. Only 7 posts. Traffic has gone down a lot too. Wonder if the two are correlated. Could be that rather, the previous week I had an explosion of traffic and things are drifting down back to normal numbers, still higher than three weeks ago. My brief summaries on different magic systems and my reference guide for different weapon modifications were very popular though. Ah well, writing things people like isn't the most important reason I started a blog. I started a blog as an outlet for my ideas, to practice writing more, to get in touch with more GURPS fans because the discussions I want to hear don't get started enough. I am thinking of writing another bit on obscure weapons after the whip post got a lot of attention. Maybe showing off other weapons that are cool but often overlooked might be enjoyable. I might do some more monsters but I don't know what theme to tackle next, and creating a monster just for the sake of creating a monster seems like a poor idea. I like to start with a concept of "How can I challenge a player in an unusual way" and go from there. Nothing novel about "this is a guy with a sword and a shield, and he is like the other guy with a sword and a shield, but this guy with a sword and shield has more striking strength." Maybe monsters that take advantage of odd terrain? Edit: Also forgot, this week was my cent-postial. Hooray.