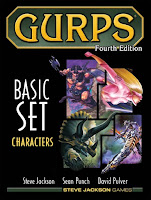 So another week, another GURPSday, let's take a look at what happened this time.

No new blogs this week, so let's see what happened around the GURPS-o-sphere.

The Mook is doing a series on creating another short adventure for conventions. They always turn out pretty fun, so that's neat. I've been enjoying Dungeon Fantastic's series on stocking monsters for dungeons. Somehow, Ironemblem Gaming seems to be missing from the list, and it started a new series on creating a short adventure as well. This post on planning as you go was pretty popular as well. It kinda grooves with my GMing style as well. I play in a sorta Collaborative Storytelling way, in which I need to know my players goals and plans to make sure that the types of things they want to happen, can happen. If a player says, "I want to listen for rumors at the park," I need to know what kind of rumors they want to listen for, and why, because that means so many things to so many people. I like this post on easy armor design, I enjoy these "build-your-own" type posts. Maybe I should take a look at Pyramid 3/52 also? Also, it looks like Alternate Dungeons II has a new revision out with errata corrections.

Traffic took a big dip this week, for some reason, Google+ gave me a lot less hits. I've been accidentally filtered for "spamming" before, so I wonder if that happened? Top five posts this week are my post on Negotiation, The Callous Disadvantage, The two week old post on some blank slate thugs, The almost two month old Spider Five Room Dungeon, and the post on building novel techniques using Martial Arts.
I've been writing a ton of reviews recently, but haven't been writing a lot of monster stats and dungeons lately. Still trying to find some recommendations for some good mapping software.I did enjoy writing this one, but it's a lot of information for a single evening of writing, and I think it could have benefitted from some discrete maps instead of abstract walking. Other than that, it felt pretty good on an abstraction level. I think it could have been better if I spent more time planning it out instead of making it all in a handful of hours, but for the first year of this blog, I challenged myself to at least one blog post a day, which I haven't failed yet.
I used the SJGames Game Finder and I am currently interviewing a player to join my in real life campaign, so I had to update my almanac document, and my campaign planning form. The almanac is what I call the player accessible digest on my relevant locations, NPCs,  and ongoing plot threads. The player is interested to join, and I'm excited to add a new player, but we still need to hash things out a bit before it is 100% official. Been thinking about picking up Banestorm because it's what that player used when statting out an earlier version of his character, and because I never looked at a hardcore treatment of a setting before, so maybe I can pick up some setting design pointers by emulation?
We've had two unfortunate incidents in consecutive weeks that lead to cancelling game night because a player couldn't attend. I think I need to find out what to do in those situations because right now, it's only a few players, but if I had a larger group, and we had to cancel every time one player couldn't make it, we'd almost never play.
In real real life, finished a pretty tough work project with a pretty tight deadline, was worried about not making it, but I did it. Lost five pounds over the last month too, which is nice.
Posted by Pseudonym at 7:07 AM